D-leverage is the proprietary tool we use at Darwinex that measures the risk of a trading decision.

The most common way of measuring the risk of a trade is through its nominal leverage.

This is done by dividing the nominal volume of a trade by the account's equity. Thus, a trade with a leverage of 5:1 is equivalent to opening a volume 5 times superior to said account's equity.

The answer would be a yes, partly, because this leverage/risk focus does not take into account one fundamental factor when it comes to evaluating the risk of an asset: its volatility:

At the risk of oversimplifying, it is not the same thing to have a trade, with a nominal leverage of 5:1 on the EURUSD, as one with the same leverage on the GBPJPY, as this last trade would tend to be a lot more volatile than the first one.

D-Leverage measures the risk of a trading decision per position

At Darwinex we have created our own way of measuring the risk per position - not per trade-, and we have called it D-Leverage.

The final result is standardized in terms of the EURUSD. Therefore, a position with a D-Leverage of 3, would be the same as opening a trade on the EURUSD with a nominal leverage of 3.

This way of measuring the risk of any position, taking as a reference the EURUSD, is called the D-Leverage.

Thanks to the D-Leverage, you will be able to compare the risk of all your trading positions regardless of the assets it includes, the type of strategy, etc.

What would be the D-Leverage of our previous example with the pairs EURUSD and GBPJPY?

Remember that the nominal leverage of each position was.

If the volatility of the GBPJPY were 20% higher than the EURUSD, the D-Leverage would be:

The leverage adjusted to the volatility, or the D-Leverage for the GBPJPY, would be 20% higher than the EURUSD (6 to 1).

Thanks to the D-Leverage, you will be able to compare both risks and reach the conclusion that GBPJPY presents more risk than EURUSD should both have the same nominal leverage.

In this example, we are going to show you how D-Leverage evolves in the following three positions.

During this time period, you can see 3 distinct phases:

How is the D-Leverage calculated?

(Bear in mind that, for a time, trades with different nominal leverage and volatility coincide.)

Let's suppose that, when you open the trades, the volatility of these two pairs in relation to the EURUSD is the following:

You can see on the graph how the 3 positions progress across time: 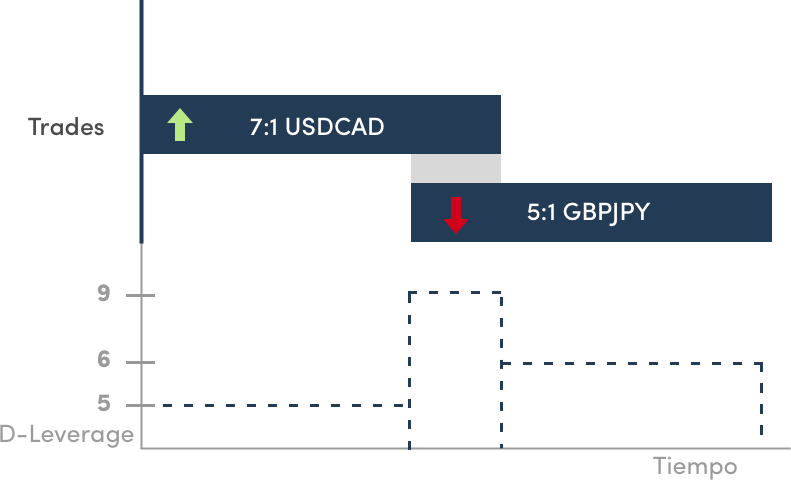 You can see that the D-Leverage has changed its value across the 3 positions in the following way:

The value of the D-Leverage has changed over this 3 positions based on nominal leverage, volatility and the correlation between all the assets open simultaneously.

In the ''Underlying Strategy'' tab of any DARWIN, you will be able to analyze the progress of a strategy's return, together with the D-Leverage and the number of trades opened simultaneously on each position.

In the "Investable Attributes" / "Ra" tab, you can analyze both the D-Leverage as well as the duration of each position on the underlying strategy.

You may read more about the Risk Adjustment (Ra) Investable Attribute HERE.

Measuring the Risk of a Trading Decision (D-Leverage)

This tutorial makes a case for the need to measure the risk of a trading strategy in terms of trading decisions instead of using the volatility of past returns.

We introduce our proprietary metric, D-Leverage, discuss the motivation behind it and make a case for how it helps us in better approximating a more realistic Value-at-Risk for any given trading strategy.

Calculating the Risk (D-Leverage) of a Position

In this tutorial, we describe in detail how to calculate the risk of a trading position in terms of D-Leverage.

The concept of position is introduced: what they are &  how they are constructed.

We conclude with a discussion on Control values that D-Leverage is bound by, a measure that enables us to ensure that the risk calculated for any given position is indeed representative of the actual risk the trader is taking at that point in time.